Our background – we have two long haired dachshunds one is 8 and one is 9, (Drake and Daisy). We wanted to make sure that (Hunter) would get along with our dachshunds before we adopted him. (Hunter) was a breeding dog and around 5 years old. He had never really known love in his life. The breeder cut off 1/2 of one of his ears when they cut his hair. He is missing most of his front teeth. When we first met (Hunter) now named Chase he barely left his foster mom Grace’s side. He wagged his tail and was excited to meet Drake and Daisy. His foster mom said that it was the first time he had wagged his tail the entire time she had him. We knew he would be a perfect fit. We took him home on 10/10/2019. He was so very shy, would back up quickly when you tried to pick him up but once he was picked up he loved being held and loved on. When we got home he found his “safe spot” in the kitchen. He would venture from that spot but always return to it because that’s where he felt safe. 14 days later and he no longer needs his “safe spot” He only used that spot for about 2 days before he started really feeling comfortable with us. This has been the most rewarding experience. Everyday he makes a little progress. He no longer backs up when we try to pick him up. He cuddles up on the couch with his fur siblings. He enjoys chewing on bones (Previously he didn’t understand what those were). His personality is coming out. He walks with a purpose anywhere he goes. He still walks around in circles (We think he was in a kennel and that was his exercise previously) It has only been 14 days, I cant wait to update you on how he is in a month, couple months, a year. He is doing so great, he is so happy, we are so happy we rescued him. When I look at pets, I see them as family. I hope that if you’re looking to adopt/rescue that you know they are going to be your family members. You don’t give up or get rid of family members. If you have the same outlook as me, then adopting is for you! Its one of the best decisions we have made! 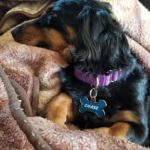 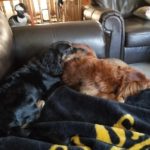 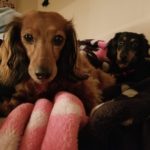